Homily (Reflection) for Holy Saturday (Easter Vigil) (B) (31st March, 2018) on the Gospel and the celebration

Gospel: Mk 16:1–7.
Readings from the Old Testament can be reduced according to circumstances. Minimum of three (3) is recommended. But in special cases, the readings can still be reduced to two. However, the third reading (Ex 14:15-15:1) is compulsory.
We join the Church who awaits at the Lord’s tomb meditating on Christ’s suffering and death. Easter celebration begins with a tone of joy. The priest/s and other ministers wear white vestments. Everyone who takes part in this vigil comes with a candle. The Easter Vigil is made up of four parts, namely: brief service of light, liturgy of the word, Baptism and/renewal of Baptismal vows, and liturgy of the Holy Eucharist.
Before the commencement of the vigil, every light in the church is put off and a large fire is prepared at a suitable place outside the church where the first part of the celebration, service of light, begins. The absence of light in the church signifies that the Lord (the light of the world) is still lying in the tomb, cf. Jn 8:12; 9:5.
Topic: Do not be alarmed ... (Mk 16:6).
There is a story of a woman who died suddenly. Her husband and loved ones put some valuables inside the casket before the burial as it was common then. And among those who were present for the burial were some thieves who valued the worth of what were put inside the casket. After a careful thought, they decided to exhume the body at night to take away those valuables. Although they succeeded in exhuming the body but the unexpected happened; when they opened the casket the woman woke up. They ran away leaving behind even the implements they used in exhuming her. After sometime the woman decided to go home. On reaching the house, he knocked on the door. Her husband thought it was a kind of dream but when he heard the knock again and again, he enquired. The voice he heard looked very familiar. As a result, he opened the door and behold before him standing the woman that was buried few hours ago. While trying to escape he pushed her aside and ran for his dear life.
In Igbo land, there are many names and sayings that depict how dreadful death is. They include – Onwubiko (pleading with death), Onwudinjo (death is evil), Onwuchekwa ( pleading with death to wait), onye cheta onwu o mebe nwayoo (the remembrance of death humbles everyone) and so on. And for our modern-day pastors and prophets, the easiest way to get attention is by ‘seeing’ death around the target and claiming to have the power to avert it. Death seems to be the most dreaded phenomenon in the world. Despite all the breakthroughs made by science, death remains elusive. The Athenians listened to Paul. But “when they heard of the resurrection of the dead, some mocked; but others said, ‘We will hear you again about this’ (Acts 17:32). 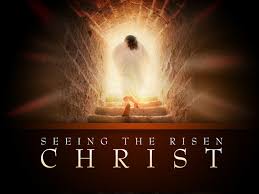 Today’s gospel tells us how the women went to the tomb where Jesus was laid with the spices they bought to anoint him. And as they were on their way, “They had been saying to one another, ‘Who will roll away the stone for us from the entrance of the tomb?” (Mk 16:3). This statement shows how incapacitated the women were before the stone that was used to close the entrance to the tomb. According to the gospels, it was a great stone, cf. Mk 16:4; Matt 27:60. Yet when they looked up they saw that the very large stone had already been rolled back, cf. Mk 16:4. The women entered the tomb and saw a young man who said to them: “Do not be alarmed; you are looking for Jesus of Nazareth, who was crucified. He has been raised; he is not here. Look, there is the place they laid him” (Mk 16:6). But unlike the man whose wife came back to life who ran away, he went further: “But go, tell his disciples and Peter that he is going ahead of you to Galilee; there you will see him, just as he told you” (Mk 16:7).
Cast your mind back a little at people’s reaction even that of the Church during the Ebola menace. It shows us how much we fear death. We are celebrating today Jesus who rose from the dead. As we have seen, death seems to be the most feared. If the power of death could not hold Jesus in the tomb, what do you think that is too difficult for him? Hence, with the angel I tell you “Do not be alarmed....” That God who rose Jesus from the dead is still God and is ever ready to help his children. But we must unite with him in death so that we might be united with him in the resurrection, cf. Rom 6:5. May we say with Saint Peter: “Blessed be the God and Father of our Lord Jesus Christ! By his great mercy we have been born anew to a living hope through the resurrection of Jesus Christ from the dead” (1Pt 1:3). We must always trust God knowing fully well that nothing is impossible for him even to raise from the dead, cf. Matt 19:26; Mk 10:27; Lk 1:37; 18:27.
Bible Reading: Hag 2:1-9; Jer 46:27-28; Matt 28:16-20; 1Cor 15: 1-58.
Silent Prayer: What problem do you consider too difficult for Christ who died for us and is risen?
Let us pray: God grant us the grace to know Christ who rose from the dead and the power of his resurrection (cf. Phil 3:10) – Amen.
You are free to share this reflection with others if you consider it worthy.