One man after sojourning outside his country before coming back home informed his parents and siblings of his intention. They were very happy because they had not seen him for some time but were startled at his wish that they should not let anyone know about his intention to come home. After battling with it for some time, some of them went about divulging the entire information at their disposal to whomever that cares.
Later, the man returned on the very date he had told them. It was a moment of great joy for the entire family and some others who came to welcome him based on the information some members of the family disseminated. However, the joy was cut very short because that same night, armed robbers came and carted away everything he came home with.
Topic: The Problem.
Considering the plight of lepers today, one can easily imagine what it was like in Jesus’ days. Judging from the scriptures, it was one of the most dreaded diseases in Israel, cf. Lev 13:45-46. And the cure of leprosy was beyond human capacity. Hence the king of Israel tore his clothes when Naaman was sent to him by the king of Aram to be cured of leprosy, cf. 2Kg 5:1-7. But God who created everything out of nothing by his words cures leprosy and do much more if he chooses by his words, cf. Gen 1:1-31; Heb 11:3; Ps 148:5; Mk 1:41. 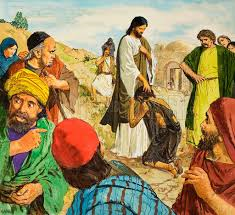 As leprosy was one of the most dreaded diseases, one would expect that whoever could cure that would have a very high price. The gospel tells us what Jesus demanded from the leper he cured:
After sternly warning him he sent him away at once, saying to him, ‘See that you say nothing to anyone; but go, show yourself to the priest, and offer for your cleansing what Moses commanded, as a testimony to them’ (Mk 1:43-44).
Although, nobody would imagine that the leper would go against the instruction clearly given to him by Jesus but the gospel goes on to tell us what the man actually did and its consequences:
But he went out and began to proclaim it freely, and to spread the word, so that Jesus could no longer go into a town openly, but stayed out in the country; and people came to him from every quarter (Mk 1:45).
Certainly, the leper just like the family of the man we saw in our introductory story had his reasons but could that be better than obeying God? We also saw the outcome of refusing to obey in our opening story.
What about us? Are we different? Jesus tells us: “No longer do I call you servants, for the servant does not know what his master is doing; but I have called you friends, for all that I have heard from my Father I have made known to you” (Jn 15:15). And the preceding verse reads: “You are my friends if you do what I command you” (Jn 15:14). The Psalmist has this: “Blessed are those who keep his testimonies, who seek him with their whole heart” (Ps 119:2). Jesus is also telling us, “Blessed ... are those who hear the word of God and keep it!” (Lk 11:28; cf. Rev 1:3). Again in the letter of Saint James we also read, “But be doers of the word, and not merely hearers who deceive themselves. For if any are hearers of the word and not doers, they are like those who look at themselves in a mirror” (Jas 1:22-23).
God “is mindful of his covenant forever, of the word that he commanded, for a thousand generations” (1Chr 16:15). The Psalmist wrote, “But the steadfast love of the Lord is from everlasting to everlasting on those who fear him, and his righteousness to children’s children, to those who keep his covenant and remember to do his commandments” (Ps 103:17-18; cf. Ps 25:10). God ever does his part. The problem is in listening to him and doing what he asks of us. In the book of Genesis, after creating man and woman, God told them “...You may freely eat of every tree of the garden; but of the tree of the knowledge of good and evil you shall not eat, for in the day that you eat of it you shall die” (Gen 2:16-17). When they kept to this instruction everything was moving fine until they decided to go their own way by listening to Satan, cf. Gen 3: 1-19.
Saint Paul rightly questioned, “For who has known the mind of the Lord, or who has been his counsellor?” (Rom 11:34; cf. 1Cor 2:16) It is always better to hearken to the words of the Lord, cf. 1Sam 15:22.
Bible Reading: Gen 3:1-19; 1Sam 15:1-23; Jas 1:19-27; Rom 15:1-6; 1Cor 2:6-16.
Silent Moment: Do you follow God or something else?
Let us Pray: Lord, may we always follow you and do all you asks of us – Amen.
You are free to share this reflection with others if you consider it worthy.