Homily (Reflection) for the Twenty-Fourth Sunday of the Year (A) (17th September, 2017) on the Gospel 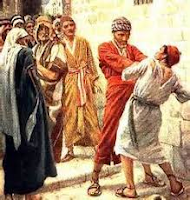 There is a story of the grandmother who told the secret of her long and happy marriage. “On my wedding day, I decided to make a list of ten of my husband’s faults which, for the sake of the marriage, I would overlook.” A guest asked the woman what some of the faults she had chosen to overlook were. The grandmother replied, “To tell you the truth, I never did get around to making that list. But whenever my husband did something that made me hooping mad, I would say to myself, ‘Lucky for him that’s one of the ten.”[1]
Topic: ...if you do not forgive (Matt 18:35).
Beyond three times prescribed by the Jewish law, Peter asked Jesus in today’s gospel whether we are required to forgive others only seven times. However Jesus replied, “Not seven times, but, I tell you, seventy-seven times” (seventy times seven). To drive the message home, He gave a parable of the unforgiving servant in which a king forgave his slave who could not repay ten thousand talents he owed him because he pleaded not even for the cancellation of the debt but just for time. The same slave as he was leaving the king’s presence met a fellow slave who owed him a hundred denarii. He seized him by the throat and demanded his money. His fellow slave pleaded with him, “Have patience with me, and I will pay you” (v. 29) but he refused and threw him into prison. Note that his fellow slave pleaded in the same words he pleaded with the king, cf. Matt 18:26. When the news reached the king, he summoned the slave and said to him,
You wicked slave! I forgave you all that debt because you pleaded with me. Should you not have had mercy on your fellow slave, as I had mercy on you? And in anger his lord handed him over to be tortured until he would pay his entire debt (Matt 18:32-34).
To better understand what the wicked slave lost because he could not forgive, let us compare the two debts. A denarius was the usual day’s wage for a labourer and a talent worth more than fifteen years’ wages of a labourer. It is palpable that the two cannot be compared and the possibility of the wicked slave repaying can only be imagined.
We often consider what others did against us as unbearable. However, we rarely think of what we do ourselves. The Psalmist wrote, “...he is our God, and we are the people of his pasture, and the sheep of his hand” (Ps 95:7). In the words of Saint Paul, “...whether we live or whether we die, we are the Lord’s” (Rom 14:8). Again, “...we are the temple of the living God” (2Cor 6:16). In sum, we are not our own, cf. 1Cor 6:19. Therefore, whatever wrong one does even those against oneself is done against God. Just imagine the magnitude. Like the wicked servant, nobody can pay back what he/she owes God, cf. Ps 49:7-8. Hence, “Happy are those whose transgression is forgiven, whose sin is covered” (Ps 32:1).
We ought to forgive others. It saves us from a lot of troubles. That is the assurance of God’s mercy without which we are doomed, cf. Matt 6:12. 14-15; Lk 11:4. Hence Jesus warns each and every one of us, “So my heavenly Father will also do to every one of you, if you do not forgive your brother or sister from your heart” (Matt 18:35). Again, “whenever you stand praying, forgive, if you have anything against any one; so that your Father also who is in heaven may forgive you your trespasses” (Mk 11:25) lest our prayers will become abomination in the sight of God, cf. Prov 15:8-9. 21:27. Finally, it is what one gives that awaits him or her, cf. Lk 6:37; Matt 7:2; Mk 4:24.
Bible Reading: Ps 32; Ps 50; Matt 6:9-15; Eph 1:3-7; Col 1:11-14.
Thought for today: ...forgive, and you will be forgiven (Lk 6:37).
Let us pray: Let us pray: Lord, forgive us our debts, as we also have forgiven our debtors – Amen.
You are free to share this reflection with others if you consider it worthy.