Recall your needs as many as possible before proceeding. We shall come back to them. 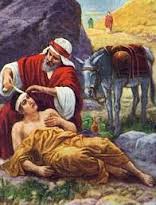 
Jesus answered the question asked by a lawyer in today’s gospel to justify himself about who is one’s neighbour with the story of the Good Samaritan. We picked four characters – the man who fell into the hands of robbers, the priest, the Levite, and the Samaritan. According to Robert J. Karris “The lawyer’s question stems from debates about who belongs to God’s people and therefore is an object of neighbourly love.[1] The Scribes limited neighbourly love to Israelites.


The road where the robbers attacked the man was well-known as “the happy hunting-ground of brigands”. As a result, Barclay described him as “a reckless and foolhardy character”.[2] Therefore, he could be blamed for what happened to him.


A priest, one specially trained to perform religious duties and responsibilities[3] was the first to see the man. Those listening to Jesus definitely would expect something better than what they heard about the priest (v.31). The Levite, a member of the Israelite tribe descended from Levi and was either a priest or assistant of the priest/s[4] was the second to see the man. The expectation surely will be the same or very similar to that of a priest. However, he faithfully copied the priest. The third was a Samaritan, whom the people might have considered as the villain but,


… he was moved with pity. He went to him and bandaged his wounds, having poured oil and wine on them. Then he put him on his own animal brought him to an inn, and took care of him. The next day he took out two denarii, gave them to the innkeeper, and said, ‘Take care of him; and when I come back, I will repay you whatever more you spend’ (Lk 10:33-35).


The priest and the Levite could have good reasons. According to Barclay, this Israelite priest “was remembering that he who touched a dead man was unclean for seven days” thereby setting the claims of ceremonial above those of charity and the temple and its liturgy meant more to him than the pain of man, Num 19:11.[5] The present-day priests’ and Levites’ reasons might include having more important thing/s, the identity of the man, does not want to be stained nor to waste his resources on a stranger who might never appreciate what he did, avoiding the troubles of security agents, not prepared for that, and so on.


Both the priest and the Levite knew both the true God and his commandments and are Israelites. According to Longman dictionary of contemporary English (2009), a neighbour is “someone or something that is next to another person or thing of the same type”. Because the priest and the Levite shared the same creed with this man and knew the commandments more than others, one would have expected something better from them. But the long-awaited help came from where it was least expected – a heretic, and an archenemy.


Again, the priest and the Levite might have been touched by the condition of the man but did not go beyond that. Our faith in God must go beyond theory, cf. Jas 2:14-16. In the words of Barclay, “the help must be practical and not consist merely in feeling sorry.... Compassion, to be real, must issue in deeds”.


The Catechism of the Catholic Church reads,


The works of mercy are charitable actions by which we come to the aid of our neighbour in his spiritual and bodily necessities. Instructing, advising, consoling, comforting, are spiritual works of mercy, as are forgiving and bearing wrongs patiently. The corporal works of mercy consist especially in feeding the hungry, sheltering the homeless, clothing the naked, visiting the sick and imprisoned, and burying the dead. Among all these, giving alms to the poor is one of the chief witnesses to fraternal charity: it is also a work of justice pleasing to God (n 2447).


Let each person go back to the list of his or her needs earlier made. How many of them require God to come down from heaven to solve? Jesus is telling us the same thing he told the lawyer, go and do likewise.


The man who fell into the hands of robbers you will meet might be in need of either spiritual or corporal works of mercy or even both. There should be no boundary. Barclay (2006) rightly maintained, “Any man of any nation who is in need is our neighbour. Our help must be as wide as the love of God” (p. 141).


It might be more difficult if one knows that a person caused what he or she is suffering. Barclay (2006) wrote further, “We must help … even when he has brought his trouble on himself, as the traveller had done” (p.140).


Unless we follow the footsteps of the Good Samaritan, the world will not become a better place. Let us all go and follow his example.


Thought for today: How often have you turned away from your neighbours because of whatever reason?


Let us pray: Lord, we ask you to give us the grace and the courage to offer you selfless services in our neighbours – Amen.