Solemnity of the Most Holy Trinity (B)

0 Solemnities and Feasts, Sunday homilies 04:28
A+ A-
Print Email

Homily (Reflection) for the Solemnity of the Most Holy Trinity (B) (30th May, 2021) on the Gospel and the Solemnity

Topic: Manifestations of the Trinity. 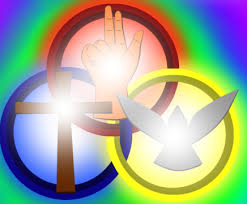 In the Old Testament, the image of God the Father is more prominent than that of God the Son and God the Holy Spirit. This does not imply that either God the Son or God the Holy Spirit or both are not in the Old Testament as attested by these statements: “... the Spirit of God was moving over the face of the waters” (Gen 1:2), “Then God said, ‘Let us make man in our image, after our likeness ...’” (Gen 1:26). Again, in the prophet Hosea we read: “... out of Egypt I called my son” (Hos 11:1). Although this statement looks as if referring just to Israel but the gospel according to Saint Matthew states that it also refers to Christ, cf. Matt 2:15. And many other passages also made mention of the “Spirit of God” cf. Gen 41:38; Ex 31:3; Num 24:2, among others.

The image of God the Son and God the Holy Spirit are better seen in the New Testament. Beginning with the angel’s message to the Blessed Virgin Mary “The Holy Spirit will come upon you, and the power of the Most High will overshadow you; therefore the child to be born will be called holy, the Son of God” (Lk 1:35). And the gospel according to Saint Mark also reads: “The beginning of the gospel of Jesus Christ, the Son of God” (Mk 1:1). According to Saint John, the essence of his gospel is for us to “believe that Jesus is the Christ, the Son of God” (Jn 20:30-31). Although the first letter of Saint John states that all must believe in this testimony (cf. 1Jn 5:10; Jn 3:18) but the Jews saw the whole idea of Jesus being the Son of God as a very bitter kola to chew and was their major reason why Jesus deserved to die, cf. Jn 19:7. Even the unclean spirits proclaimed that Jesus is the Son of God, cf. Mk 3:11; Lk 4:41. And the equality of Jesus and his Father is not in doubt: “I and the Father are one” (Jn 10:30).

Before leaving this world, Jesus promised his disciples the Holy Spirit, cf. Jn 16:7 and fulfilled this promise on the Pentecost day as we celebrated last Sunday, cf. Acts 2:1-4. The Father sent his Son into the world “as the Saviour of the world” (1Jn 4:14; 4:10) and also testified for Him in these words: “This is my Son, my Chosen; listen to him!” (Lk 9:35). And Jesus made the Father known in the world, cf. Jn 1:18; 17:26. And again, of the Holy Spirit, Jesus said: “When the Advocate comes, whom I will send to you from the Father, the Spirit of truth who comes from the Father, he will testify on my behalf” (Jn 15:26). Just as Jesus made known to us what he learnt from the Father, (cf. Jn 15:15), the Holy Spirit said Jesus “... will guide you into all the truth; for he will not speak on his own authority, but whatever he hears he will speak, and he will declare to you the things that are to come” (Jn 16:13).

We read from the prophet Daniel: “The king said to Daniel, ‘Truly, your God is God of gods and Lord of kings, and a revealer of mysteries, for you have been able to reveal this mystery’” (Dan 2:47). Although the mystery of the Most Holy Trinity is central to the Christian faith yet it cannot be fully understood. Hence, it is rightly called a mystery. It is God Himself who reveals mysteries including the mystery of the Most Holy Trinity according to his will, cf. Matt 11:27; Lk 10:22; Gal 1:16.

We are created by the Most Holy Trinity and in the likeness of the Most Holy Trinity (Gen 1:26; 5:1). And in today’s gospel we read: “Go therefore and make disciples of all nations, baptizing them in the name of the Father, and of the Son and of the Holy Spirit” (Matt 28:19). As we can see in this passage, we are also called by and baptized in the Most Holy Trinity. Hence as introduction to today’s solemnity we read from The Sunday Missal: “We celebrate our baptism in the name of the Trinity as a result of which we have received the spirit of sons and are privileged to call the great God of glory and majesty our Father” (Culled from The Sunday Missal: A new edition (1995). London: HarperCollinsReligious, p. 573).

We read from Saint Paul’s first letter to the Corinthians:

And we conclude with this from the first letter of Saint John: “Beloved, we are God's children now; it does not yet appear what we shall be, but we know that when he appears we shall be like him, for we shall see him as he is” (1Jn 3:2). Let us therefore be ready for God by being good manifestations of the Most Holy Trinity we ought to be. Remember to be holy as you manifest the Most Holy Trinity.

Silent Prayer: To what extent are you a manifestation of the Most Holy Trinity?

Let us Pray: Glory be to the Father, and to the Son and to the Holy Spirit as it was in the beginning is now and ever shall be world without end – Amen.