A priest was preparing to throw himself over a cliff. On the way he stopped at the house of a priest friend to say goodbye. He told him the story of his sad life: how little he had loved God and served the people. How he had broken every commandment there was. And now his guilt was too great even for God to forgive.
His friend reasoned with him, “But you know that the mercy of God is immeasurably great. And he always offers us his love. We must only accept it.”
But the priest was still inconsolable, “my soul,” he said, “is like a bucket full of holes. As soon as God fills it with forgiveness, it leaks out.”
His friend took him by the hand and said, “Perhaps your soul is like a bucket full of holes. But when it is thrown into the ocean of God’s mercy, it does not matter how many holes are in it. The mercy of God, like the sea water, will be inside and outside the bucket, surrounding it from all sides.[1]’”
Topic: We deserve pity. 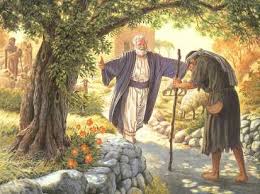 In today’s gospel, the Pharisees and the scribes were upset because Jesus welcomed and ate with sinners. In response, Jesus used a number of parables of which the parable of the loving father (the prodigal son) is just one of them.
The loving father had two sons. The younger one took his own share of their father’s wealth to a distant land and squandered it after which things got really bad. When he returned to his father for forgiveness he was immediately reinstated to his princely position instead of being treated as a hired servant. Their father celebrated his return although his elder brother who was in the field got so angry that he refused to enter the house. He felt their father was unfair.
Some like the elder son do think that God is inconsiderate. How could He be so blind to all one is going through just because of Him? Yet His arms are ever wide-open welcoming sinners. Some even see themselves as losers since they have little or nothing to show for their steadfastness.
God warns,
... when a righteous man turns away from his righteousness and commits iniquity and does the same abominable things that the wicked man does, shall he live? None of the righteous deeds which he has done shall be remembered; for the treachery of which he is guilty and the sin he has committed, he shall die (Ezek 18:24; cf. Ezek 3:20; 18:26).
And nobody knows when God will ask for each and every one of us, cf. Matt 24:42; Mk 13:33, 35. Also we read from the letter of Saint James, “whereas you do not know about tomorrow. What is your life? For you are a mist that appears for a little time and then vanishes” (Jas 4:14).
The book of Proverbs admonishes us, “Let not your heart envy sinners, but continue in the fear of the LORD all the day” (Prov 23:17). Nobody in his or her right senses will abandon his/her princely state and leaves the house he/she is living in unless for something better. Sin is a disease, cf. Matt 13:15; Jn 5:14. And a sick person deserves pity. Hence, the loving father rightly pleaded with the elder son, “Son, you are always with me, and all that is mine is yours. But we had to celebrate and rejoice, because this brother of yours was dead and has come to life; he was lost and has been found” (Lk 15:31-32). Those who are strong ought to bear with the failings of the weak, and not to please themselves, cf. Rom 15:1.
In this parable also, we see the danger of what I prefer to call autonomous or self-styled spirituality (one being in charge of his/her spiritual life). The younger son never had problems until he left for a distant land. In our introductory story we see a priest who would have ended it all if not for the intervention of his priest friend. We will surely end up in problems if we do not listen to good pieces of advice.
Again, it is not easy to make a u-turn. Although we do not pray for more prodigal sons and daughters but whoever turns back ought to be received not just by God but by all of us with arms wide-open. Many prodigal sons and daughters die daily in distant lands.
And again, we all are prodigal sons and daughters of which I am number one. Hence we read from prophet Isaiah, “All we like sheep have gone astray; we have turned everyone to his own way” (Is 53:6). Similarly, we read from the book of Ecclesiastes, “Surely there is not a righteous man on earth who does good and never sins” (Eccl 7:20).
Finally, fellow prodigal sons and daughters, wait no more. You may have broken every commandment, it is time to return to our Loving Father. The mercy of God is much bigger than all our sins. Let us go back and sin no more, cf. Jn 5:14; 1Cor 15:34.
Bible Reading: Ezek 3:16-27; 18:1-32; Jas 4:13-17.
Thought for today: You deserve to live.
Let us pray: Lord help us to emerge victorious in our battle against sin – Amen.
You are free to share this reflection with others if you consider it worthy.