Homily (Reflection) for Friday of the Second Week of Lent (22nd March, 2019) on the Gospel 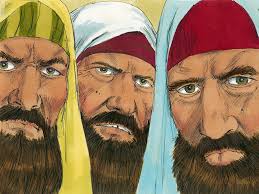 We see in today’s gospel the parable of the wicked tenants. In this parable, a landowner “planted a vineyard, put a fence around it, dug a wine press in it, and built a watchtower. Then he leased it to tenants and went to another country” (Matt 21:33).
When he sent his slaves to the tenants for his own share of the produce, the tenants seized the “slaves and beat one, killed another, and stoned another”. He later sent more slaves and they were treated like the first group. When he finally sent his son thinking, “They will respect my son,” the tenants said to themselves, “This is the heir; come, let us kill him and get his inheritance” and so they did. Jesus then asked, “Now when the owner of the vineyard comes, what will he do to those tenants?” Those listening to Him replied, “He will put those wretches to a miserable death, and lease the vineyard to other tenants who will give him the produce at the harvest time.” The chief priests and the Pharisees would have arrested Jesus when they realised that the parable was all about them, but for the fear of the crowd who regarded Him as a prophet.
Surely it is very easy for anyone to condemn those tenants. But let us leave them for now. In Saint Paul’s first letter to the Corinthians he asks, “For who sees anything different in you? What have you that you did not receive? If then you received it, why do you boast as if it were not a gift?” (1Cor 4:7).
All we have is from God, cf. 1Chr 29:12; 1Sam 2:7; Prov 22:2. And like the landowner, God expects each and every one of us to give Him His own share of the produce through His slaves, cf. Matt 25:31-46. But what does He get in return? Sometimes His slaves are suppressed, maltreated, imprisoned, even extorted, and so on. And at other times some even deny Him the ownership of what He has given us to look after. Or do you think that we have been fair enough? Whoever fails to give God His share will find it very hard to make heaven, cf. Matt 19:23.
This is the time to lay up “treasures in heaven, where neither moth nor rust consumes and where thieves do not break in and steal” (Matt 6:20). God’s slaves come for His share in different ways. If you want to have enough in heaven that will be truly yours give God His due (pay what you owe), cf. Lk 16:12.
Bible Reading: Zech 7:8-14.
Thought for today: Giving God His share of the produce.
Let us pray: God, help us this Lent and all the days of our lives to willingly give you your share of the produce – Amen.
You are free to share this reflection with others if you consider it worthy.