Homily (Reflection) for Saturday of the Second Week of Lent (23rd March, 2019) on the Gospel 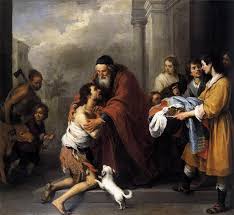 Today’s gospel is made up of a prelude (Lk 15:1-3) and the parable of the prodigal son (Lk 15:11-32). In the prelude, the Pharisees and the scribes grumbled because Jesus did not only welcome sinners but also ate with them. The parable of the prodigal son is better known today as the parable of the loving father; it shows the father’s love more than the prodigality of the son.
The loving father had two sons. The younger requested and got his share of their father’s wealth. After squandering it in a distant country, things got so bad that he had to hire himself out to a citizen who sent him to feed the pigs in the field. He would have ate the pods for the pigs but was not given. When he came to his senses he returned home to plead with their father to take him as a hired servant. However, on sighting him at a distant the man ran to him, put his arms around him and kissed him. Before he could finish his prayer the loving father asked the slaves to quickly put the best robe on him, a ring on his finger, and to kill the fatted calf for a feast.
When the elder brother who was in the field came near to the house and learnt what was happening he refused to enter the house. He was angry that their father never appreciated his absolute loyalty. Their father pleaded with him, “Son, you are always with me, and all that is mine is yours. But we had to celebrate and rejoice, because this brother of yours was dead and has come to life; he was lost and has been found” (Lk 15:31-32).
Lenten season is also a period of homecoming. God is waiting for me and for you to return. Just as the prodigal son was restored to his lost state, God will restore us if only we could come back. Although God desires that we remain without going astray “but if any one does sin, we have an advocate with the Father, Jesus Christ the righteous” (1Jn 2:1). God’s kindness is not a licence to sin, cf. Rom 6:15. The Pharisees, the scribes, the elder brother and their likes ought not be angry at God’s mercy, cf. Matt 20:13-15. He owns us all. He is the one to condemn or to acquit, cf. Lk 6:37; Is 3:13.
Bible Reading: Prov 7:1-5; 9:1-6.
Thought for today: God is waiting for us all to come back.
Let us pray: Lord, strengthen us in our effort to come back wholly to you – Amen.
You are free to share this reflection with others if you consider it worthy.