0 Memorials 04:50
A+ A-
Print Email
Homily (Reflection) for the Memorial of Saint Martin De Porres, Rel., (3rd November, 2018) on the Gospel and the Memorial 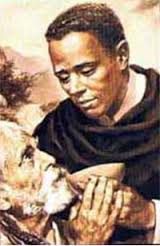 Saint Martin de Porres (9th December 1579 - 3rd November, 1639), the illegitimate son of a Spanish gentlemen and a freed slave from Panama, of African or possibly Native American descent, was born in Lima, Peru. His father abandoned him, his mother and younger sister at a young age. After two years in primary school, he was sent to learn how to cut hair and the medical arts. He was greatly ridiculed for being of mixed-race. Martin found it very difficult becoming a religious because law forbade all descendants of African or Indians from being full members of religious orders. At 15, he entered the Dominican Convent of the Rosary in Lima as a servant boy and became a Dominican lay brother in 1603. Ten years later, he was assigned to the infirmary where he remained until his death. He had virtues needed to carefully and patiently care for the sick. Martin was praised for his unconditional care of all people. His life reflected his great love for God and all of God's gifts. Before his death after almost a year full of illness, he was widely known and accepted. His body exhaled a splendid fragrance and was still intact when exhumed 25 years later. He was beatified by Pope Gregory XVI on 29th October, 1837 and canonized by Pope John XXIII on 6th May, 1962. He is the patron saint of people of mixed race, innkeepers, barbers, public health workers and more.[1]
Topic: Consider others.
Jesus went to a Pharisee’s house for a meal in today’s gospel. He watched how the guests scrambled for places of honour. Jesus therefore advised them not to take the place of honour when invited for a wedding banquet to avoid being asked to vacate the place for someone more distinguished.
But why do people scramble for places of honour? They include pride, fear of uncertainty, and so on. I would like us to consider only the fear of uncertainty; not being sure that those at the lower places can get anything.
Whenever people have the opportunity of taking directly from anything common, many do either forget that it is qualified by common or the meaning of common. At public functions for instance, it is not uncommon to see people take food, meat, drinks, and so on as if they are for them alone. Those who handle public coffers are even worse because they do not suppose to touch it.
Today’s gospel challenges us to consider our brothers and sisters always. Should everyone be conscious of the feelings of others, the rush for places of honour among other things will drop. Saint Martin de Porres was one of those whose lives were filled with a lot of difficulties yet he considered others.
Bible Reading: Phil 2:1-11.
Thought for today: Consider the common good.
Let us pray: God give us a heart that will understand the needs of others – Amen.
Saint Martin De Porres – Pray for us.
You are free to share this reflection with others if you consider it worthy.