Homily (Reflection) for the Memorial of Saint Andrew Kim Taegon & Comps., MM., (20th September, 2018) on the Gospel and the Memorial 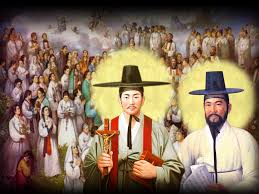 The evangelization of Korea began during the 17th century through a group of lay persons. A strong vital Christian community flourished there under lay leadership until missionaries arrived from the Paris Foreign Mission Society. During the terrible persecutions that occurred between 1839 and 1867, one hundred and three members of the Christian community gave their lives as martyrs. They include a few bishops and priests, but for the most part lay people. Outstanding among these witnesses to the faith were the first Korean priest and pastor, Andrew Kim Taegon, and the lay apostle, Paul Chong Hasang. Pope Saint John Paul II, during his trip to Korea, canonized these martyrs on May 6, 1984.[1]
Topic: Under many sins.
Jesus was a guest in the house of a Pharisee named Simon when a known sinner in the city came with an alabaster jar of ointment. She stood at Jesus’ feet and bathed them with her tears, dried them with her hair, kissed and anointed them with the ointment. The Pharisee was uncomfortable knowing too well the kind of person the woman was. Jesus told him a story of a creditor who had two debtors. One owed him five hundred denarii, and the other fifty. The creditor cancelled their debts when they could not pay. Jesus then asked him who among the two would love the creditor more. Simon answered, ‘I suppose the one for whom he cancelled the greater debt.’ 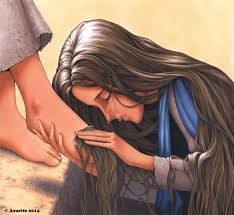 Turning to the woman Jesus said to Simon,
Do you see this woman? I entered your house; you gave me no water for my feet, but she has bathed my feet with her tears and dried them with her hair. You gave me no kiss, but from the time I came in she has not stopped kissing my feet. You did not anoint my head with oil, but she has anointed my feet with ointment. Therefore, I tell you, her sins, which are many, have been forgiven; hence she has shown great love.
This sinful woman was before Jesus’ host and indeed the people of the city a total write-off, cf. Lk 18:11. Hence, he doubted Jesus’ authenticity just because He allowed the woman to touch His feet.
Beyond how others saw the sinful woman, she willingly supplied those things the Pharisee would have done as a host in extraordinary way. Physically, she came with only an alabaster jar of ointment yet she was able to produce enough tears out of sorrow for her sins to bathe Jesus’ feet. And without a towel, she wiped them with her pride as a sign of her humility, cf. 1Cor 11:15. She did not measure less in love because she kept kissing those feet passionately because they are better than those that bring good news, cf. Rom 10:15. And selflessly she profusely poured ointment on those feet.
All these ‘hidden under many sins’ earned her the words she needed most: “Your sins are forgiven.” And, “Your faith has saved you, go in peace.” We must come back to God with our burdens of sin for pardon. Nobody is a total write-off before God.
Bible Reading: Is 1:2-20; Lk 18:9-14; Heb 8:1-13.
Thought for today: God still loves you.
Let us pray: May the God of compassion forgive us all our sins, – Amen.
Saint Andrew Kim Taegon & Companions – Pray for us.
You are free to share this reflection with others if you consider it worthy.