Homily (Reflection) for the Twenty-Fifth Sunday of the Year (B) (23rd September, 2018) on the Gospel

In the company of a nobleman, Nasruddin visited the public bath. Once there, the nobleman jokingly asked Nasruddin, ‘If I were a slave, what would be a reasonable price for me?’
Responded Nasruddin: ‘Only 50 dinars.’
The nobleman angrily told him, ‘why, my bathing cloth costs 50 dinars!’
Nasruddin retorted: ‘Oh, that’s exactly what I told you – the price of your bathing cloth! Because, a nobleman has no value!’ Culled from Sagayanathan, A. (2009). Launching Pad: Stories for Sunday Homilies, Year – A, B & C. Bangalore: Asian Trading Corporation, p. 218.
Topic: Set priorities right. 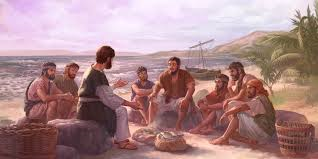 In today’s gospel, Jesus began to reveal to His disciples the hard truth that “The Son of Man is to be betrayed into human hands, and they will kill him, and three days after being killed, he will rise again” (Mk 9:31). The gospel goes further, “But they did not understand what he was saying and were afraid to ask him” (Mk 9:32).
Despite the fact that the gospel explicitly stated Jesus’ intention for the twelve: “And he appointed twelve, whom he also named apostles, to be with him, and to be sent out to proclaim the message, and to have authority to cast out demons” (Mk 3:14-15), in their ignorance, they “argued with one another who was the greatest” (Mk 9:34). And this is quite contrary to Jesus’ intention for them, cf. Mk 10:41-45; Matt 20:24-28.
On our call as Christians, Saint Peter wrote, “But you are a chosen race, a royal priesthood, a holy nation, God's own people, that you may declare the wonderful deeds of him who called you out of darkness into his marvellous light” (1Pt 2:9). He went on, “Once you were no people but now you are God's people; once you had not received mercy but now you have received mercy” (1Pt 2:10). And in the gospel according to Saint John we read that “... to all who received him, who believed in his name, he gave power to become children of God” (Jn 1:12). Saint John also wrote, “By this it may be seen who are the children of God, and who are the children of the devil: whoever does not do right is not of God, nor he who does not love his brother” (1Jn 3:10). Earlier in the Book of Deuteronomy we read, “... what does the LORD your God require of you, but to fear the LORD your God, to walk in all his ways, to love him, to serve the LORD your God with all your heart and with all your soul” (Deut 10:12). Similarly, in prophet Micah we also read, “He has showed you, O man, what is good; and what does the LORD require of you but to do justice, and to love kindness, and to walk humbly with your God?” (Mic 6:8).
Juxtaposing the call of the apostles and their behaviour in today’s gospel on one side and our own call and our behaviour today on the other, are we better off? Through the prophet Hosea God complains, “My people are destroyed for lack of knowledge; because you have rejected knowledge, I reject you from being a priest to me. And since you have forgotten the law of your God, I also will forget your children” (Hos 4:6). Being a priest in this contest is not limited to the ministerial priests. Every baptised is a priest as already cited, cf. 1Pt 2:9. Through the prophet Jeremiah God also complains, “For my people are foolish, they know me not; they are stupid children, they have no understanding. They are skilled in doing evil, but how to do good they know not” (Jer 4:22).
Dear friends in the Lord, God is embittered because of our wickedness, injustice, hatred, selfishness, faithlessness, and so on through which we have disorganized the world, cf. Gen 6:5-8. Just like the apostles who were ignorantly arguing over who was the greatest, what bothers us today is not our inability to do the will of God but the things we expect from God. Remember that for Nasruddin, the value of the nobleman in the slave market is just his bathing cloth. In like manner, God does not worth more than one of the channels we look for husbands, wives, children, wealth, protection, good health, longevity, power, breakthrough, connections, employment, and so on? We rarely see God as our Father who teaches us. And the relationships between ourselves seem to be worst. Most often we see the other just as a means to what we want. Christians are expected to “... be blameless and innocent, children of God without blemish in the midst of a crooked and perverse generation, among whom you shine as lights in the world” (Phil 2:15).
Bible Reading: Jer 4:1-4; Jn 1:1-13; Phil 2:12-17; Mk 10:35-45; 1Jn 3:1-24.
Thought for today: Reflect briefly on why you search for God and again why you keep relationships including your marriage.
Let us pray: God, our Father, give us the grace to follow you always as our Father, our Lord, and our Master. And may we also respect the dignity of others always – Amen.
You are free to share this reflection with others if you consider it worthy.