Homily (Reflection) for the Memorial of Saint Vincent de Paul, P., (27th September, 2018) on the Gospel and the Memorial 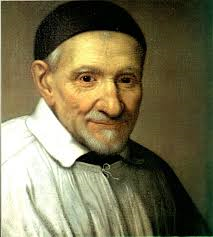 Saint Vincent de Paul was born to a poor peasant family in Pouy on 24th April, 1581. He was hired as a tutor based on his brilliant performance in his studies. His earnings helped him in the study of theology at the University of Toulose. He was ordained in 1600 and remained in Toulose for a time. In 1605, he was captured and sold into slavery. He escaped after two years and returned to France. While studying in Rome, he was a chaplain to the Count of Goigny and also in charge of distributing money to the deserving poor. He spent his life preaching missions to and providing relief to the poor and also established hospitals for them. Later, he extended his ministry to convicts. He founded the Ladies of Charity, and the Congregation of Priests of the Mission (Vincentians) to help him carry on the ministry. Saint Vincent helped in the reformation of the clergy and the seminary formation. He died in Paris on September 27, 1660. Pope Benedict XIII beatified him on August 13, 1729 and was canonized by Pope Leo XIII on June 16, 1737. He is the patron of charities; horses; hospitals; leprosy; lost articles; Madagascar; prisoners; Richmond, Virginia; spiritual help; Saint Vincent de Paul Societies; Sacred Heart Cathedral Preparatory; Vincentian Service Corps; volunteers.[1]
Topic: Hurt not.
When Herod heard about Jesus, he was perplexed because some said that John had been raised from the dead. Herod wondered because he beheaded John.
The book of Proverbs reads, “The eyes of the LORD are in every place, keeping watch on the evil and the good” (Prov 15:3). And He will repay everyone according to their deeds, cf. Matt 16:27; Rev 22:12.
Herod’s worry confirmed God’s words, “There is no peace...for the wicked” (Is 48:22; cf. Is 57:21; Gen 50:15). Again, “the evil man has no future; the lamp of the wicked will be put out” (Prov 24:20). God also threatened to send curses, confusion, and frustration upon the wicked, and in all they undertake until they are destroyed and perish on account of the evil they do, cf. Deut 28:20.
We must wash ourselves; make ourselves clean; remove the evil of our doings and cease to do evil, cf. Is 1:16. Our life is like a mist that appears for a little time and then vanishes, cf. Jas 4:14. The book of Proverbs rightly warns, “Do not boast about tomorrow, for you do not know what a day may bring forth” (Prov 27:1). We of perpetrate evils on the grounds of the condition we are in. Saint Vincent de Paul met with different challenges ranging from poverty, enslavement, and so on. He did not hurt anybody. Hurt not today that you may have peace tomorrow.
Bible Reading: Jas 4:13-17.
Thought for today: Prepare a peaceful tomorrow.
Let us pray: God, give us heart of flesh to love you and our neighbours – Amen.
Saint Vincent de Paul – Pray for us.
You are free to share this reflection with others if you consider it worthy.