Twelfth Sunday of the Year (B)

Certainly those who grew up in the rural areas will be conversant with what happened in the story Father Sagayanathan took from Saint Francis de Sales’ letter. It was about a custom of the country district in which Saint Francis lived. “He had often noticed a farm servant going across a farmyard to draw water at the well; he also noticed that, before she lifted the brimming vessel, the girl always put a piece of wood into it. One day – he went out to the girl and asked her, ‘Why do you do that?’ she looked surprised and answered, as if it were a matter of course, ‘Why? To keep the water from spilling ... to keep it steady!’” (Sagayanathan, A. (2009). Launching pad: Stories for Sunday Homilies year – A, B & C. Bangalore: Asian Trading Corporation, pp. 196-197). 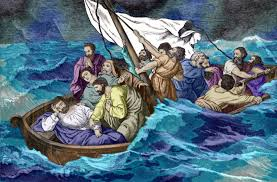 At every point, each person is faced with options of what to take and what not to take; what to do and what not to do, and so on. And whatever choice one makes goes a long way determining whether or not one will be successful and to what extent. That was exactly what confronted the apostles in today’s gospel. When Jesus said to them: “Let us go across to the other side” (Mk 4:35) they could opted otherwise. And heeding to that, “... leaving the crowd behind, they took him [Jesus] with them in the boat, just as he was” (Mk 4:36). Again, they could have opted for the crowd. And again, I see in the expression “just as he was” that they did neither manufacture another Jesus nor applied some cosmetics to Him as some do today (cf. 2Cor 11:4).

When one is settling for any choice, it is important to remember that there is a price for every choice. While they were in the sea with Jesus, “A great windstorm arose, and the waves beat into the boat, so that the boat was already being swamped” (Mk 4:37). And the gospel reads further: “But he [Jesus] was in the stern, asleep on the cushion; and they woke him up and said to him. ‘Teacher, do you not care that we are perishing?’” (Mk 4:38). Just imagine what would have been their fate if they had opted for the crowd.

It is important to note that Jesus was with his apostles from the beginning of their action of crossing the sea. Sometimes it does seem that some do forget Jesus either entirely or only involve Him when, where, and how they think either they do not know what else to do or just as one of the options. If one takes Jesus to where ever he/she goes and to whatever he/she does, there will be no room for fear. We read from the prophet Nahum: “The LORD is good, a stronghold in a day of trouble; he protects those who take refuge in him” (Nah 1:7). And again, “We know that in everything God works for good with those who love him, who are called according to his purpose” (Rom 8:28). Hence, Jesus asks: “Why are you afraid?” (verse 40).

But for one to go for God, one must leave the rest (the crowd) because no one can serve two masters at a time, cf. Matt 6:24; Lk 16:13. The concluding verse of today’s gospel reads: “And they were filled with great awe and said to one another, ‘Who is this, that even the wind and the sea obey him?’” (Mk 4:41). He is “... our only Master and Lord” (Jude 1:4). But the problem seems to be that “The ox knows its owner, and the ass its master's crib; but Israel does not know, my people does not understand” (Is 1:3). Hence God asks: “A son honours his father, and a servant his master. If then I am a father, where is my honour? And if I am a master, where is my fear? says the LORD of hosts to you...” (Mal 1:6). One’s decision for either God or the crowd is made known only through faith and the faith through action, cf. Jas 2:17.

Saint Francis in his letter to a friend later on told that story we had seen in the introductory part of this homily and added, “‘So when your heart is distressed and agitated, put the Cross into its centre to keep it steady!’ In every time of storm and stress, the presence of Jesus and the love which flows from the Cross bring peace and serenity and calm” (Sagayanathan, A. (2009). Launching pad: Stories for Sunday Homilies year – A, B & C. Bangalore: Asian Trading Corporation, p. 197).

Silent Prayer: When did you last involve God in your decisions and actions sincerely?

Let us Pray: Our Lord Jesus Christ, although we had often turned aside thinking we could do it better without you, we sincerely ask you to be always with us in every stage of whatever we do  – Amen (cf. Rom 3:12).