Memorial of Saint Martin of Tours, B. 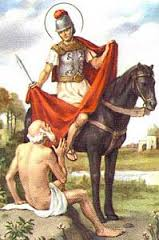 Saint Martin of Tours was born in the present day Hungary either in 316 or 336 AD. He became a Christian at the age of 10. As a young soldier, he encountered a naked beggar in Amiens. He cut his cloak with his sword into two halves and gave one to the beggar. That night, he had a vision in which Christ appeared and said to him, “Martin, a mere catechumen has clothed me.” When he was about 20 years old, he made it clear to his superiors that he would no longer fight, following his formed Christian conscience, but his superiors accused him of cowardice. Although he vehemently refused the bishopric, he was ordained the bishop of Tours in 371 and he became a holy and hardworking Bishop. He established a system of parishes to manage his diocese and visited each parish at least once per year. He passionately and faithfully proclaimed the Gospel of Jesus Christ and won many to the Christian faith. Martin died in Candes-Saint-Martin, Gaul in 397. He is the patron of the poor, soldiers, conscientious objectors, tailors, and winemakers. Topic: Remember ‘THANKS’. During the time of Jesus just like in other parts of the world, the state of lepers in Israel was very bad. Medicine was yet to be ready to combat the spread of infectious diseases like leprosy. So to avoid their spread, their victims were normally quarantined. In Israel, lepers were seen as unclean and must be avoided, cf. Lev 13:3; 5:3. According to the book of Leviticus, there must be demarcation between the clean and the unclean, cf. Lev 10:10. Even nonhumans were not spared, cf. Lev 14:34-47. Hence in the gospel pericope, we read: “...ten lepers approached him. Keeping their distance, they cried out, saying, ‘Jesus, Master, have mercy on us!’” The work of priests was far beyond what it is today. It was the priest who “shall examine the diseased spot on the skin of his body; and if the hair in the diseased spot has turned white and the disease appears to be deeper than the skin of his body, it is a leprous disease; when the priest has examined him he shall pronounce him unclean” (Lev 13:3). Lepers remain in the state of uncleanness as long as the disease lasts and as a result “shall dwell alone in a habitation outside the camp” (Lev 13:46). Just as the priest declared one unclean on account of leprosy, if a leper is cured by any means, it was also a priestly duty to declare him or her clean and also to perform ritual cleansing and atonement for the victim, cf. Lev 14:1-20. With this in mind, we can understand why Jesus said to the ten lepers unlike when he performed other miracles: “Go and show yourselves to the priests”. This picture of the state of lepers in Israel at the time of Jesus shows the magnitude of what Jesus did for the ten lepers. We can also better imagine how he felt that made Him queried: “Were not ten made clean? But the other nine, where are they? Was none of them found to return and give praise to God except this foreigner?” Surely, many if not all of us will instantly condemn those nine ungrateful men, many of whom must have been Jesus’ kinsmen (Jews). Just as the state of lepers in Israel was very bad, today there are many conditions that are really bad. Some differ from culture to culture. Many of us were in such pitiable states. And some have been shielded from them. How do we appreciate these? Today’s gospel calls for serious examination on how often we have been grateful to God, to others, and also to ourselves. God is still asking of the people he has blessed with all kinds of gifts. Bible Reading: Ps 136:1-26; Eph 2:1-10. Thought for today: Are you the Samaritan or one of the ungrateful nine who went away? Let us pray: Bless the Lord, O my soul, and all within me, bless his holy name. Bless the Lord, O my soul, and do not forget all his benefits – Amen (Ps 103:1-2). Saint Martin of Tours – Pray for us. For more homilies (reflections): Visit our website: www.thepulpitonline.com ; Like us on Facebook: www.facebook.com/thepulpitonline ; Follow us on Twitter: www.twitter.com/thepulpitonline ; Join our WhatsApp Group via: +234 810 298 6313 ; Send us Email: thepulpitonline@gmail.com To Contact and/or to support this ministry: Tel: +234 813 305 0302 ; Email: thepulpitonline@gmail.com May God bless you all+
Posted by thepulpitonline.com
Share to: