Homily (Reflection) for the Memorial of Saint Scholastica, V., (10th February, 2020) on the Gospel and the Memorial
(Monday of the Fifth Week in Ordinary Time (II)) 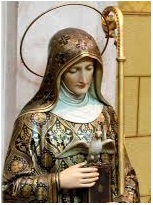 Saint Scholastica, twin sister of Saint Benedict, was born in 480 of wealthy parents. She founded a religious community for women near Monte Cassino at Plombariola. The twins visited each other once a year in a farmhouse because Benedict was not permitted inside the monastery. According to the Dialogues of St. Gregory the Great, they spent their last day together in prayer and conversation. Scholastica sensed her death was close at hand and she begged Benedict to stay with her until the next day but he refused because it was against his own Rule. She asked God and a severe thunderstorm broke out, preventing Benedict and his monks from returning to the abbey. Benedict cried out, “God forgive you, Sister. What have you done?” She replied, “I asked a favour of you and you refused. I asked it of God and he granted it.” Three days later, Benedict saw the soul of his sister rising heavenward in the form of a white dove. He buried her in the tomb he had prepared for himself.[1]
Topic: The Mighty Healer.
Jesus is seen in today’s gospel as the healer of every form of disease. On His arrival with His disciples to Gennesaret people rushed about the whole region and brought those who were sick to Him wherever He was. They begged Jesus to allow the sick they laid in the marketplaces touch even the fringe of His cloak. And all who touched it were healed.
What people did in today’s gospel depicts what many do today. Often scriptural passages like “He took our infirmities and bore our diseases” (Matt 8:17) are used as back up. Indeed, Jesus healed so many people as one can see both in today’s gospel and so many other passages. But He healed the whole man. Hence sometimes while healing He would say, “your sins are forgiven”, cf. Matt 9:2.
People go far and near in search of bodily healing. Yet Jesus admonished us to fear what can destroy both soul and body in hell, cf. Matt 10:28; Lk 12:4.
How many ever consider the state of their souls today? Even most of the supposed healers preach virtually everything with the exception of repentance. However this is the most important, cf. Matt 16:26; Mk 8:36; Lk 9:25. Sin destroys both soul and body in hell, cf. 1Cor 11:27-30. Whoever succeeds in finding only the bodily health found nothing.
Again, Matthew 8:17 often quoted especially while healing the body refers to Isaiah 53:4. This prophesy primarily refers to Christ’s death for our salvation not simply bodily healing. It is also seen as synonymous with Jn 1:29. As you search for the healing of the body, remember your soul which is the most important.
Bible Reading: Is 6:9-10; 1Cor 11:27-30.
Thought for today: You are made of BODY and SOUL.
Let us pray: Lord, help us search for the good of both our body and our soul – Amen.
Saint Scholastica – Pray for us.
You are free to share this reflection with others if you consider it worthy.