Third Sunday of Lent (B)

A lady once visited with one black nylon bag. She told us where and how she bought the bag. During adoration, the priest organising it told them to pick each of the bags with three thousand naira (₦3,000.00) upwards for a special blessing. Trust people they all rushed for the bags, some with much more than the amount. The parish priest and myself became interested in the bag. We therefore asked the lady to show us the content of the bag. She opened the bag and behold it contained a small bottle of olive oil, one small packet of mustard seed, and two stickers. With five hundred naira (₦500.00), one can comfortably buy all these including the bag. Bearing in mind Christ’s injunction: “Heal the sick, raise the dead, cleanse lepers, cast out demons. You received without paying, give without pay” (Matt 10:8), one wonders what two thousand five hundred naira (₦2,500.00) multiplied by the number of persons who picked the bag is for. Could it be for the ‘special blessing’? 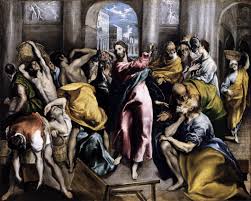 Making a whip of cords, he drove all of them out of the temple, both the sheep and the cattle. He also poured out the coins of the money changers and overturned their tables. He told those who were selling the doves, ‘Take these things out of here! Stop making my Father’s house a marketplace!’ (Jn 2:15-16).

Before we go further, let us briefly look at the activities of those people Jesus found in the temple. According to William Barclay in his work, The daily study bible: The gospel of John, vol. 1, chapters 1-7. He rightly noted that “Passover was the greatest of all the Jewish feasts” (p. 108). And it was compulsory for every adult male Jew living within 24.135 kilometres (24,135 metres) from Jerusalem to attend. As at that time, Jews were already living in different parts of the world and they all desired to celebrate the Passover in Jerusalem. As a result, they come with different currencies.

Every Jew of over nineteen years old was expected to pay the temple tax (one half-shekel) estimated at about 6p. And a man’s wage was about less than 4p which implies that the temple tax was about two day’s wages. Again, this temple tax must be paid in either Galilaean shekels or in shekels of the sanctuary because every other currency was considered as unclean and therefore unworthy for God (p. 109).

In the words of William Barclay, there were money-changers in the Temple courts. “If their trade had been straightforward they would have been fulfilling an honest and a necessary purpose” (p. 109) but to change every half-shekel, they charged up to 1p. So for one to change two shekels, the money changers would made 4p out of him which was about one day’s wage (p. 109). Although money changers making something out of their work is not the problem but they charged very high and worst still in the name of God.

Again, visits to the temple were normally associated with one sacrifice or another. Therefore, it would look right if one could buy the victims in the temple court. And again, the victim must be perfect and unblemished (Lev 22:21). As a result, there were inspectors appointed by the temple authorities who charged 1p for the inspection of a victim. And if a victim was bought outside the Temple, it was almost certain that it would be rejected. A pair of doves cost about 4p outside the temple and as much as 75p in the temple. One can imagine what the difference would be like if it was a sheep or a cattle that one wanted to buy. It is important to remember that all these were also done in the name of religion.

In our introduction, we saw a lady who bought what she could have bought for five hundred naira as much as three thousand naira. One wonders where lies the difference between what we do today in the name of God and what those men were doing that Jesus could not stand. If he comes today, what do you think he will do to us?

Again, when the people demanded for a sign Jesus said to them: “... Destroy this temple, and in three days I will raise it up” (Jn 2:19). Although they wondered how he could raise in three days what has taken forty-six (46) years. But Saint John carefully added: “But he was speaking of the temple of his body” (Jn 2:21). Hence Saint Paul questions: “Do you not know that your body is a temple of the Holy Spirit within you, which you have from God?” (1Cor 6:19; cf. 2Cor 6:16).

There are six Sundays in the season of Lent. As we celebrate the third Sunday of Lent, it is important to remember that our own Passover is near. We ought to go into our temples. Just as the temple in Jerusalem was meant for prayers for everybody, our temples were made for the glorification of God, cf. 1Cor 6:20. Do we still glorify God with our bodies or have we turned them into something else? We must always remember that we are not our own, cf. 1Cor 6:19.

The gospel concludes, “But Jesus on his part would not entrust himself to them, because he knew all people and needed no one to testify about anyone; for he himself knew what was in everyone” (Jn 2:24-25). We must therefore be very careful because God knows each and every one of us too well. With this in mind, let us follow the example of Christ and clean up God’s temples (our bodies). God is beckoning on all of us thus:

Yet even now, says the Lord, return to me with all your heart, with fasting, with weeping, and with mourning; rend your hearts and not your clothing. Return to the Lord, your God, for he is gracious and merciful, slow to anger, and abounding in steadfast love, and relents from punishing (Joel 2:12-13).

Thought for today: As we approach the Passover, have you gone into God’s temple lately and what did you see?

Lord, as we are coming closer to the feast of Passover, lead us into your temple, open our eyes to see how dirty we are, and purge all that is not of you so that we may benefit from your Son’s death and resurrection – Amen.