Homily (Reflection) for the Feast of Saint Patrick, Bp, (17th March, 2021) on the Gospel and the Feast 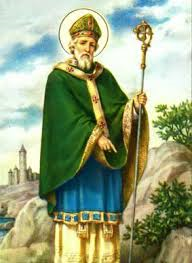 According to the Confession of Patrick, Saint Patrick (Apostle of Ireland) was captured by Irish pirates from his home in Great Britain when he was about 16, and taken as a slave to Ireland. He reunited with his family after six years and later returned to northern and western Ireland as a missionary and later a bishop.

He is the patron of Ireland, Nigeria, Montserrat, Archdiocese of New York, Roman Catholic Archdiocese of Newark, Boston, Rolla, Missouri (USA), Loíza, Puerto Rico, Murcia (Spain), Clann Giolla Phádraig, engineers, paralegals, and Archdiocese of Melbourne. He is also invoked against snakes, and sins.  Saint Patrick is venerated today, 17 March, which is said to be the date of his death[1].

Topic: Yet to hear His last.

In today’s gospel Peter, Andrew, James, and John were washing their nets after all night fishing without success when Jesus came, entered into Peter’s boat and taught the people from there. After His teaching Jesus said to them, “Put out into the deep water and let down your nets for a catch.” Although Peter expressed their ordeals, he went on to say “Yet if you say so, I will let down the nets.” And “When they had done this, they caught so many fish that their nets were beginning to break.” Peter pleaded with Jesus to leave them yet He said to them, “Do not be afraid; from now on you will be catching people.”

Saint Patrick also had his own ordeals. Yet after regaining his freedom and became a priest, he went back to the land of his captivity and preached the gospel tirelessly. His apostolate was so much felt that he is not celebrated in Ireland by the church alone but also by the entire country.

Each and every one of us has history dented with lots of things including setbacks, mistakes, anxieties, disappointments, difficulties, and so on. Some of us have even terribly resigned to fate and cannot see any future again. Today’s gospel and the life of the Saint Patrick encourage us to listen to Jesus as He instructs us. Let no one be tied down by his/her past. God has better plans for you and me. He will do a new thing in our lives, cf. Is 43:19; Jer 31:22. He only demands us to obey Him like Peter and his colleagues and continue to move on after the example of Saint Patrick. If we do these, we will be amazed at what God will turn our weaknesses and disappointments into.

Thought for today: Allow God to use you.

Let us pray: May the good Lord help us surrender our lives to Him – Amen.

Saint Patrick – Pray for us.