Homily (Reflection) for the Memorial of Saint Paul Miki, and Comps., Mm, (06th February, 2021) on the Gospel and the Memorial

(Saturday of the Fourth Week in Ordinary Time (I)) 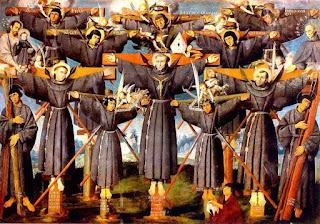 Saint Paul Miki was the son of a Japanese military leader. He was educated by Jesuits, joined the Jesuits in 1580, and became known for his eloquent preaching. He was crucified on Februay 5 with twenty-five other Catholics during the persecution of Christians under the Taiko, Toyotomi Hideyoshi, ruler of Japan in the name of the emperor. Among the Japanese laymen who suffered the same fate were: Francis, a carpenter; Gabriel, the nineteen year old son of the Franciscan's porter; Leo Kinuya, a twenty-eight year old carpenter from Miyako; Diego Kisai (or Kizayemon), temporal coadjutor of the Jesuits; Joachim Sakakibara, cook for the Franciscans at Osaka; Peter Sukejiro, sent by a Jesuit priest to help the prisoners; Cosmas Takeya; and Ventura, who had been baptized by the Jesuits, gave up his Catholicism on the death of his father, and was brought back to the Church by the Franciscans. They were all canonized as the Martyrs of Japan in 1862.[1]

The apostles returned from mission and gave account of what they did and what they taught to Jesus. He later took them to a supposed lonely place for a rest but on their arrival, they saw a great crowd waiting for them. Jesus had pity on them because they were like sheep without a shepherd and began to teach them many things.

Today’s gospel likened the crowd waiting for Jesus to a sheep without a shepherd. Could it be that shepherds were not assigned to them? Certainly, a lot but they were feeding themselves instead of the sheep, cf. Ezek 34:2. The good shepherd (Jn 10:11, 14) did not leave the sheep for any other thing.

We all have gotten the privilege to shepherd God’s flock at various capacities. However, we must ask ourselves among other questions: How often do we report back to the owner of the flock what is going on? Again, how can our flock be described – sheep with or without a shepherd? And again, have we left the sheep for some other things – pleasure, money, connections, and so on?

The work of shepherding goes beyond clerical works. You are also a shepherd where you are – family, community, school, church, and so on. Be a true shepherd to your flock.

Thought for today: You are called to shepherd.

Let us pray: Lord and Master of the vineyard, help us to shepherd your flock according to your will – Amen.

Saint Paul Miki and Companions – Pray for us.