Second Sunday of Lent (B)

A friend of mine once told me a story of his classmate who repeatedly failed virtually every Mathematical question. At a point his father hired one of the best Mathematics teachers around as his private tutor but the news still remained unchanged. His father at a point threatened to disown him. But the boy pleaded with his father, telling him how much he had tried to get a better result but all to no avail. As he was still narrating, his father cut in and told the boy that all the reasons he was giving why he should not disown him were actually the reasons why he wanted to disown him. According to the man, the boy had not acted as their people do. He went ahead and offered his son what he called the master key he would use to unlock not just mathematical problems but every task facing him in life. He said: “This might look simple but very effective. When you face any task you want to succeed in, first simplify it by adding a prefix (naira, ₦) and a suffix (kobo, K) to that thereby assuming that as what you will get”. At the end of their break the boy went back to school and used his father’s master key so well that the result became unimaginable – he moved from failing to passing almost every mathematical question. 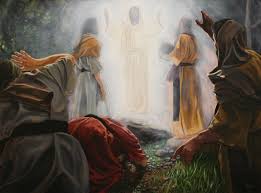 We saw the picture of the transfiguration of Jesus Christ in today’s gospel. This took place when Jesus was alone with Peter, James, and John on a high mountain (Mk 9:2). According to today’s gospel and the gospel according to Matthew (Matt 17:1), Jesus transfigured six days after he foretold of his death and resurrection. But according to Luke’s account (Lk 9:28), it was after eight days. And for William Barclay in The daily study Bible: The gospel of Mark, “There is no discrepancy here”. They all mean to say “About a week afterwards” (pp. 209-210).

Jesus was about to go to Jerusalem where what he foretold would take place. The transfiguration of Jesus has a number of significance. Just as we reflected in our homily for the first Sunday of Lent, there was need for Jesus to reflect deeply on what he was about to embark on. On that mountain, the most important figures in the Jewish culture (Moses and Elijah) appeared to and conversed with him. William Barclay in The daily study Bible: The gospel of Mark rightly noted that in Israel, Moses was the supreme law-giver and Elijah was both the first and the greatest of all the prophets (p. 211). Their appearance implies that Jesus’ decision was in line with the law and the prophets. And Jesus citing Deuteronomy said in the gospel, “... the testimony of two men is true” (Jn 8:17; cf. Deut 17:6; 19:15). These were not just two men but two real great men.

In our introductory story, that boy consistently failed virtually every mathematical question because he never saw any value in that. The disciples who were scandalized by Jesus’ proclamation of his death and resurrection needed something to hold on and there is nothing better than the glory that will come after as Saint Paul rightly quoted: “... What no eye has seen, nor ear heard, nor the heart of man conceived, what God has prepared for those who love him” (1Cor 2:9). At the glimpse of which Peter managed to utter: “... it is good for us to be here ...”

My dear brothers and sisters in the Lord, it is indeed good to enjoy the beatific vision but we must first do what God asks of us: listen to his only and beloved Son, Jesus Christ. Again, we must accomplish different acts we resolved to achieve this Lenten season bearing in mind that God will greatly reward us according to our deeds, cf. Rev. 22:12. Finally, “If for this life only we have hoped in Christ, we are of all men most to be pitied” (1Cor 15:19). Think of the world to come.

Thought for today: As one who wants to rejoice in the presence of God, do you listen to Jesus?

Lord, we ask for the grace to always listen to your beloved Son, Jesus Christ – Amen.