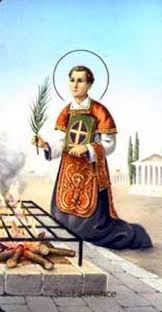 Saint Lawrence was a Roman deacon under Pope Saint Sixtus II. He was martyred four days after Pope Saint Sixtus II, probably during the persecution of Emperor Valerian. Lawrence was charged with the responsibility for the material goods of the Church, and the distribution of alms to the poor. He put together the remaining money including the proceeds from the sacred vessels he sold and distributed all to the poor, widows and orphans of Rome when he knew that he would be arrested. When the prefect of Rome demanded for the Church’s treasure, Lawrence gathered a great number of blind, lame, maimed, leprous, orphaned and widowed persons and presented them to him saying, “These are the treasure of the Church.”[1]  In great anger, he condemned Lawrence to a slow, cruel death. He was tied on top of an iron grill over a slow fire that roasted his flesh little by little. Before he died, he prayed that the city of Rome might be converted to Jesus and that the Catholic Faith might spread all over the world.[2]
Topic: A grain of wheat.
Jesus said that a grain of wheat must fall into the earth and die to produce much fruit. And “Those who love their life lose it, and those who hate their life in this world will keep it for eternal life.” Christ’s servants must follow Him and will be where He is. The Father honours whoever serves Christ.
This grain of wheat in today’s gospel refers to us, cf. Matt 13:37-38. The reason Christ chose us is to bear fruit that will last, cf. Jn 15:16. Saint Paul also wrote that we belong to Him who raised us from the dead in order that we may bear fruit for God, cf. Rom 7:4. Jesus also said that one will prove his/her discipleship by bearing much fruit, cf. Jn 15:8. So Christ is invariable telling us that we must fall into the ground and die because without bearing fruits we cannot expect reward.
Saint Lawrence fell into the earth, died, and produced much fruits. He did not love his life. Hence he kept it for eternal life. Whoever wants to keep his/her life must also fall into the ground like Saint Lawrence. But not necessarily that all must fall into that same grill Lawrence was grilled. However, we must accept any ground that pleases God so as to produce fruits for Him.
Bible Reading: Lk 14:25-33.
Thought for today: Discipleship has a price (cf. Lk 14:26-33).
Let us pray: Lord, give us the grace to fall into any ground that pleases you – Amen.
Saint Lawrence – Pray for us.
You are free to share this reflection with others if you consider it worthy.