0 Solemnities and Feasts, Sunday homilies 04:34
A+ A-
Print Email


Homily (Reflection) for the Solemnity of The Most Holy Trinity, Year C (16th June, 2019) on the Gospel and the Solemnity 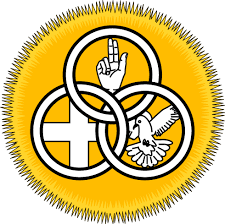 We read from the Catechism of the Catholic Church (CCC), “The Trinity is a mystery of faith in the strict sense, one of the ‘mysteries that are hidden in God, which can never be known unless they are revealed by God’” (237). In the ordinary sense, mystery is “the quality that something or someone has when they seem strange, secret, or difficult to understand or explain.”[1] And A Catechism of Christian Doctrine defines mystery as “a truth which is above reason, but revealed by God” (n.28).[2]
The image of God as Father is commonly acceptable in many religions. However, the belief that there are three Persons in one God (mystery of the Most Holy Trinity) does not go down well with some religions. For instance, the main problem the Jews had with Jesus arose from His reference to Himself as the Son of God which means making Himself equal with God, cf. Jn 5:18. 10:30-33. 19:7.
Yet undoubtedly, He is equal with the Father, cf. Phil 2:5-6. And surprisingly, the demons acknowledged this fact whenever and wherever they met Him, cf. Mk 3:11; Matt 8:29; Lk 4:41. Yet His brothers and sisters failed to see it. And in today’s gospel, Jesus revealed to us the third Person of the Most Holy Trinity, the Spirit of truth.
By the Most Holy Trinity,
We do not confess three Gods, but one God in three persons, the ‘consubstantial Trinity.’ The divine persons do not share the one divinity among themselves but each of them is God whole and entire: ‘The Father is that which the Son is, the Son that which the Father is, the Father and the Son that which the Holy Spirit is, i.e. by nature one God’ (CCC 253).
It is also important to note:
The divine persons are really distinct from one another. ‘God is one but not solitary.’ ‘Father,’ ‘Son,’ ‘Holy Spirit’ are not simply names designating modalities of the divine being, for they are really distinct from one another: ‘He is not the Father who is the Son, nor is the Son he who is the Father, nor is the Holy Spirit he who is the Father or the Son.... The divine Unity is Triune (CCC 254).
Furthermore,
The divine persons are relative to one another. Because it does not divide the divine unity, the real distinction of the persons from one another resides solely in the relationships.... While they are called three persons in view of their relations, we believe in one nature or substance.’ Indeed ‘everything (in them) is one where there is no opposition of relationship.’ ‘Because of that unity the Father is wholly in the Son and wholly in the Holy Spirit; the Son wholly in the Father and wholly in the Holy Spirit; the Holy Spirit is wholly in the Father and wholly in the Son’ (CCC255).
A priest was sitting in a Chicago airport waiting for his plane. A man sat down beside him and began to give his opinions on religion. He boasted: “I won’t accept anything I can’t understand. Take this business of three Gods in one God or whatever it is. I can’t buy that. Nobody can explain it to me, so I will not believe it.”
Pointing to the sun streaming in the window, the priest asked: “Do you believe in the sun?” “Why, of course,” the doubter admitted. “All right,” the priest continued, “the rays you see coming through that window are from the sun, 90,000,000 miles from here. The heat we feel comes from both the sun and from its rays. The Holy Trinity is something like that. The sun is God the Father; the sun sends out its rays, God the Son. Then from both the sun and its rays, from the Father and the Son, proceeds or comes the Holy Spirit, the heat. Can you explain how that happens?” The doubter quickly changed the subject.[3]
Although the Most Holy Trinity is a mystery but we are not to follow the footsteps of this doubter. Our inability to neither fully understand nor explain this mystery ought to humble us. It reminds us that we are mere humans. It is God who enlightens us, cf. Jn 1:9. As a result, we must turn Him, the revealer of mysteries for enlightenment and not resort to doubts, cf. Dan 2:47. Finally, borrowing the words of Saint Columbanus, the summary of this mystery of mysteries is this: “Who then is God? He is Father, Son and Holy Spirit, one God. Seek no farther concerning God....”[4]
Bible Reading: Phil 2:1-11; Mt 28:16-20.
Thought for today: Most Holy Trinity is a mystery.
Let us pray: God, sustain our faith in you especially when our understanding fails – Amen.
You are free to share this reflection with others if you consider it worthy.