Homily (Reflection) for the Feast of Saint John, Apostle and Evangelist (27th December) (Octave of Christmas) on the Gospel and the Feast 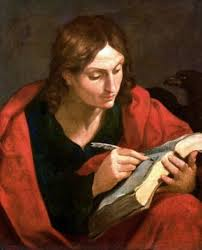 Saint John the Apostle was son of Zebedee and Salome, and one of the Twelve Apostles. He was called to be an Apostle by our Lord in the first year of His public ministry. Saint John is considered the same person as John the Evangelist, John of Patmos and the Beloved Disciple. Saint James the Great was his elder brother. Jesus referred to the duo as “Boanerges,” (sons of thunder). He is believed to be the longest living apostle and the only not to die a martyr's death. John was the only one of the Twelve Apostles who did not forsake the Saviour in the hour of His Passion and He made him the guardian of His Mother at the foot of the cross. After the Assumption of Mary, he went to Ephesus. He was later banished to the Greek Island of Patmos. John is known as the author of the Gospel of John and four other books in the New Testament - the three Epistles of John and the Book of Revelation. He died in Ephesus after AD 98 and is the patron saint of love, loyalty, friendships, and authors.[1]
Topic: ...he saw and believed (Jn 20:8).
In today’s gospel pericope, Mary Magdalene ran to Peter and John and said to them, “They have taken the Lord out of the tomb, and we did not know where they have laid him.” The duo set out for the tomb. Although John outran Peter, Peter first entered the tomb. John later entered the tomb. He saw and believed.
While discussing with Nicodemus, Jesus said, “Very truly, I tell you, we speak of what we know and testify to what we have seen; yet you do not receive our testimony” (Jn 3:11). And in his first letter, Saint John wrote,
We declare to you ... what we have heard, what we have seen with our eyes, what we have looked at and touched with our hands, concerning the word of life – this life was revealed, and we have seen it and testify to it ...so that you also may have fellowship ...with the Father and with his Son Jesus Christ (1Jn 1:1-3).
Saint John testified that “the Father has sent his Son as the Saviour of the world” (1Jn 4:14). And only those who received Him, who believed in His name, He gave power to become children of God, cf. Jn 1:12. Let no one wait to see before he/she believes because, “Blessed are those who have not seen and yet believe” (Jn 20:29).
Bible Reading: Jn 20:25-29; 1Jn 4:7-12.
Thought for today: ...the Word became flesh and dwelt among us (Jn 1:14).
Let us pray: God, open our eyes to see your Son who dwells among us – Amen (cf. Jn 1:14).
Saint John, Apostle and Evangelist – pray for us.
You are free to share this reflection with others if you consider it worthy.