No alternative: Memorial of Saint Elizabeth of Hungary, (17th November, 2018).


Homily (Reflection) for the Memorial of Saint Elizabeth of Hungary, (17th November, 2018) on the Gospel and the Memorial 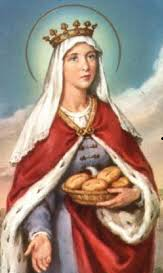 Saint Elizabeth of Hungary was born in Hungary on 7th July, 1207 to the Hungarian King Andrew II and Gertrude of Merania. Her father arranged for her to be married to Ludwig IV of Thuringia, a German nobleman when she was very young. The marriage was blessed with three children. Ludwig supported all her religious endeavours. She led an austerely simple life, wore simple clothing, practiced penance, and devoted herself to works of charity. Elizabeth used her royal position to advance her mission for charity and also built a hospital that provided for almost a thousand poor people daily. She joined the Third Order of St. Francis in 1228 and passed away at the age of 24, on 17th November, 1231 in Marburg, Hesse and was canonized on 27th May, 1235 by Pope Gregory IX. Saint Elizabeth is the patron saint of bakers, beggars, brides, charities, death of children, homeless people, hospitals, Sisters of Mercy, widows.[1]
Topic: No alternative.
Jesus used the parable of the widow and the unjust judge to instruct His disciples on the need to pray always and not to lose heart. The unjust judge “who neither feared God nor had respect for people” for a while refused to grant the widow who also lived in the same city the justice she so much desired. But the widow never gave up. She continued pleading with the unjust judge until she got justice.
Have you ever asked yourself why the widow never gave up? The reason I think is simple. She had no alternative. The reason why many turn their back on God is because they think that they have alternative/s. Remember that Saint Peter correctly replied when Jesus asked them if they would leave Him like others, “Lord, to whom shall we go? You have the words of eternal life” (Jn 6:68).
Saint Elizabeth of Hungary never saw God as an alternative hence she neither counted on her maternal nor marital status. We must follow her footsteps because God is the ultimate and has no alternative. He alone is God, cf. 2Kg 19:19; Ps 86:10; Neh 9:6. And He alone is good, cf. Mk 10:18; Lk 18:19.
Bible Reading: Jn 6:60-69.
Thought for today: God has no alternative.
Let us pray: God, help us to always remember that without you we can do nothing – Amen.
Saint Elizabeth of Hungary – Pray for us.
You are free to share this reflection with others if you consider it worthy.